New research has found that the average Brit is now spending up to £2210 in our nation’s coffee shops – and this figure looks set to rise even further!

The spend reflects the coffee sector growth over the past decade, with chain stores and independents dotting the high streets of towns and cities all over the United Kingdom.

Over 1,036 members of the British public were asked about their coffee consuming habits by Research Without Borders (RWB), who carry out online market research and academic research studies.

It should come as no surprise that these figures have been found, with an estimated 21,000 coffee shops and outlets now open in the UK alone, an increase of just over 100% since 2006 — which saw some 9,000 coffee shops operating.

With an increase in awareness, interest and in some cases reliance on coffee, we are very slowly becoming a nation of coffee drinkers, fueled by the success of chains such as Starbucks and Costa.

But it’s not just chains and independent shops that are profiting, with pubs, cafes, shops and even petrol stations all helping to keep us propped up on caffeine.

The research found that on average we visit a coffee shop up to 152 times per year, with an average cost of £13.85. Each visit lasts a quite astonishing 93 minutes, and in some cases sees us go back for another cup.

Quite a shocking set of statistics, but the figures could likely be skewed by the increase of what is becoming known as ‘coffice’ culture, whereby professionals are no conducting business within the ever-growing number of chains on our high streets.

This is having not only a huge impact on the coffee industry but the economy as a whole, with an estimated £14.5 billion of deals being conducted within the confines of the coffee shop each year.

Delving into the research further, RWB found that almost 80 per cent of those surveyed visited a coffee shop three times per week, equating to a staggering 152 visits per year.

Costing a lower figure of £8.52 per visit, the actual figure came to £13.85 per trip when transport and parking costs were factored in.

Four out of five quizzed stated that they spent part of the standard working day within a coffee shop completing average office tasks on their mobile, laptop or tablet device — such is the availability of free Wi-Fi in our favourite hot drink hangouts.

The average spending figure increased even further for self-employed workers, with an annual spend to the tune of £2,600. 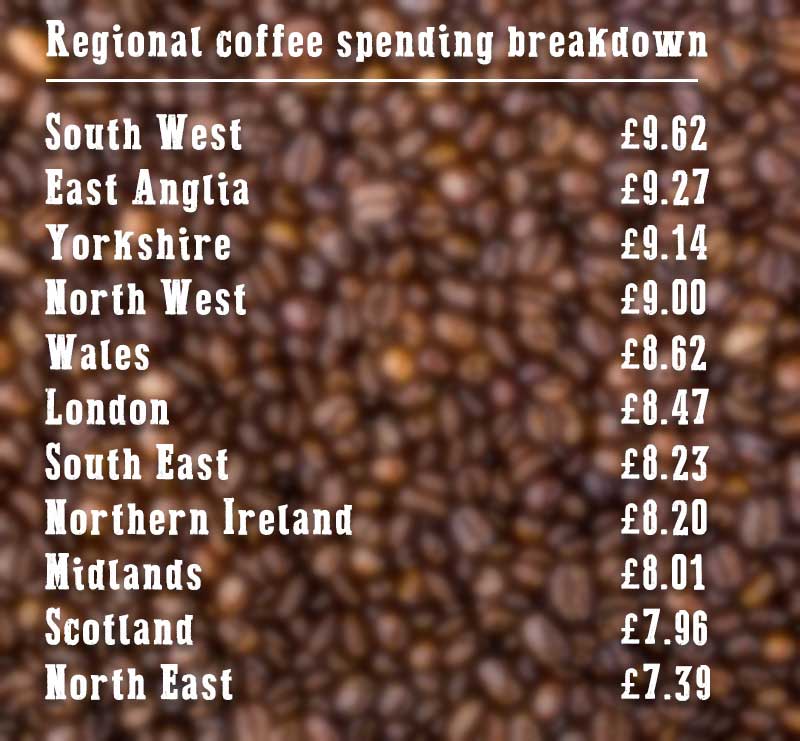 As for our average coffee orders? Only 8 per cent of the British public ordered a cup of tea, 26 per cent opted for a cappuccino and 21 per cent decided the classic latte was their drink of choice.

It seems that our own ‘coffee culture’ has developed into a sort of watered down American ‘coffice’ style approach to our coffee selling establishments.

As for who splurges the most wedge in the coffee businesses of the UK? That title goes to the customers of the South West, who spend an average £9.62 per visit, with those in the North East opting to spend just over £2 less with an average spend of an admirable £7.39 per trip.

There is definitely some serious money to be made within the coffee trade, it’s a good thing we know all about that!

If you’re looking to open your very first coffee shop or just want to save some money on key upgrades to your business, then you’ve found the perfect place.

Last updated by Damien Wilde on Monday the 10th July 2017