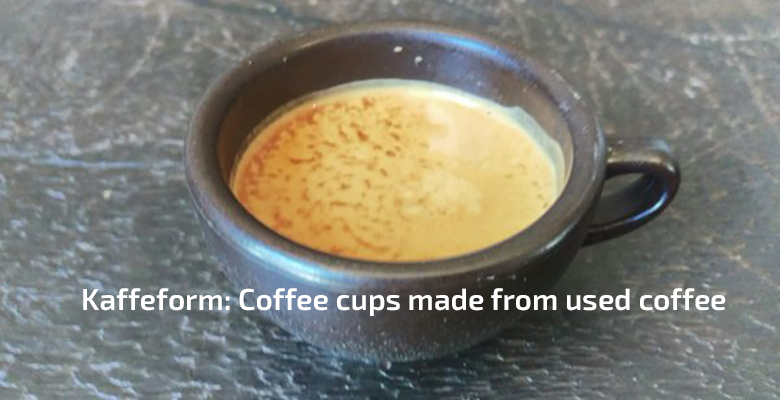 The world is going recycling mad (this is in no way a bad thing at all!), from used grounds being made into sportswear to coffee cherries being used as flour and in their own right.

So you can now drink coffee from your used coffee coffee cup! Truly coffee-ception if that is such a thing.

Kaffeeform, a German recycling company, has been producing the stylish and eco-friendly cups and saucers by binding the used coffee grounds with wood grains and resins to remain intact after usage.

Julian Lechner and his team have created an incredibly striking and stylish cup that is not only eco-friendly, but actually usable for day-to-day coffee drinking — even perfect for busy coffee shop usage.

The process of actually making the cups has taken years of development and tweaking, with Lechner even combining the used grounds with sugar in an attempt to make a sturdy mug.

This ultimately failed, with the cup breaking down after repeated usage. “We tried binding with a lot of different things,” Julian Lechner told VICE Munchies. “We even tried sugar. That was close, but basically it was a candy cup. It just kept dissolving after being used three times.”

After numerous failed concoctions and plenty of experimentation, and with the help of the German Institute, Lechner was able to come up with a mix of coffee grounds, wood grains and a lignin combination that made a solid and reliable cup that resembles a deep cast iron mug but is incredibly light.

To actually make the recycled crockery, Kaffeform collects used coffee grounds from three Berlin roasters and then delivers them to an organisation called Mosaik.

Mosaik is an organisation that pairs local businesses with physically and mentally disabled workers, so yet another reason to love this awesome German company.

The workers dry and pack the used grounds into 400 kilogram bags which are then shipped off to a factory in Baden-Württemburg to be mixed with the wood grains, biopolymers and natural fibres.

This new material is then shipped off once more, this time to Cologne to be melted and compressed into the cup moulds.

Kaffeeform estimate that it takes around six coffees worth of used grounds to make a single cup.

Finally the recycled and formed cups are sent back to Mosaik to be packed once again by the workers in reused coffee bags before being posted out to customers.

Check out the video above to see the cups in action, please note that the video is entirely in German.

Last updated by Damien Wilde on Monday the 18th July 2016