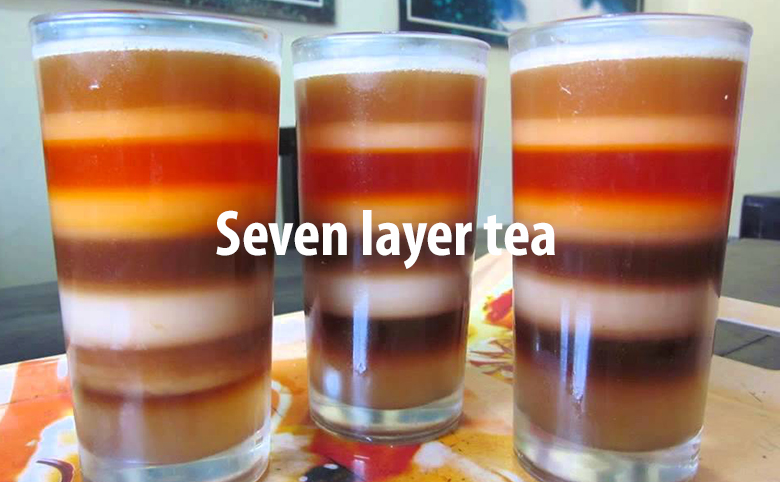 Tea comes in many guises, with just as many variations and concoctions available now more-so than ever before, but is anybody really innovating?

Well we think that we have found a truly innovative and cool looking leaf based drink, in the guise of a 7 layer — yes 7! — tea.

Coming straight from the streets of Monpuri, Bangladesh, the seven-layer tea is everything we hoped that Heston Blumenthal would be looking to create, except for the fact that someone has beaten him to it.

The drink made at Nilkantha Tea Cabin, in rural Bangladesh serves the drink for as little as around £1.

Seven layers isn’t even the maximum! The layered tea drink has sometimes contained 10 separate layers, all of which containing various and differing flavours to really tease your tastebuds.

Creating by a now local legend, Romesh Ram Gour, the experimentation by the Srimongol native led him to a secret recipe that suspends each tea into a rainbow like drink.

The mixture has taken years of honing and refining to make what is now a unique tea experience.

Mr Gour mixes different types of locally grown tea — three black teas and one green tea — with milk and spices. Each layer has it’s own distinct colour and taste, being poured on top of each other to create the seven distinctive bands.

When consuming, drinkers sip slowly trying to figure out what each layer will contain and what the taste could be made by.

In a country where the average tea costs just five pence, expecting customers to pay around 20 times that amount for a seven-layered drink is ambitious. But Mr. Gour has seen the country’s top politicians, newspapers and TV channels share his concoction with the nation, which has only helped his business.

The success of his layered tea has enabled the opening of a second tea cabin further down the same street.

Whilst the recipe is a closely guarded secret, and we might not be 100% sure on how to make them ourselves, no matter how hard we try, we have a solid selection of teas for you to attempt to emulate this top-notch tea.

Last updated by Damien Wilde on Thursday the 1st September 2016