Skip to the end of the images gallery

Skip to the beginning of the images gallery

Simple to use and beautifully designed, the Astoria Treviso R is one of our most popular coffee machines.

All prices shown are ex VAT
Contact us now to lease or purchase this machine.

We will beat any genuine UK quote.

Astoria has recently redesigned the Treviso, but in doing so they have retained the concept of simplicity and durability that has seen it become of our most popular traditional machines.

The biggest change is on the outside where Astoria has remodelled the painted stainless steel panelling, adding something of a retro-twist to the machine’s trademark and understated appearance.

As well as a restyled exterior, the Treviso R now features linear push-button controls. By altering how the panel has been laid out, Astoria has now placed all relevant controls at eye level, which has made the Treviso easier to use.

From this pane users can select any one of four programmable coffee doses, and operate the hot water tap. Steam arms are controlled by the new, ergonomic swivel-knobs.

Internally, you’ll still find Astoria’s renowned Italian-made copper boiler and piping system. Thanks to the company’s traditional approach to plumbing, the machine is able to keep brewing temperatures stable for an optimum espresso extraction. An automatic water refill (AWR) system and an integrated motor pump are also fitted as standard.

With raised groups, you’ll be able to brew directly into taller takeaway cups.

The Astoria Treviso R has been purposefully designed for the modern coffee shop that wants to be able to offer the full espresso experience, but doesn’t want to break the bank to do so.

Please note the video is of the original Treviso. 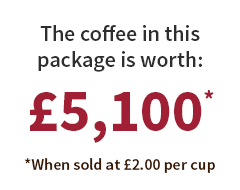